RSS
← BGGcon Day 5 – In Which Melissa is Very Domestic.
Yikes – AKA What I bought today →

Well my week and a bit as a lone parent is nearly up. As Fraser and his assorted hats and very full suitcases wing their way home, let’s take a quick look back.

The most challenging part was dealing with Otto, who is not the most self-motivated of children and who needs to be nagged to do anything. Case in point: I don’t think she has showered more than once in the last 10 days. Now I am not a “you must shower every day” person (well, I am, but not where my 8 year old is concerned), but that it stretching it a bit far even for me. I did hit unexpected success with a bribe on Sunday, though.

The best bits were the fun stuff like sneaking off to Cold Rock ice cream (Baileys and Honeycomb ice cream with cookie dough and a strawberry Freddo crushed through it = amazing) and taking the girls out to dinner tonight.

The naughtiest bits were letting the cats cruise around the house overnight. Which was not always a success, as Snowflake gets VERY chatty at around 4:30am. One more night, kitten, then Fraser will put you in your place. Which is shut up the back of the house (living room, dining room, kitchen, bathroom – it’s not like they are really deprived).

The most unexpected-but-nice thing was having a friend drop in on Friday afternoon. Even though I was clearing stuff up while we chatted, it was good to have someone to talk to (and keep me working!).

The ickiest bits were having to clean out the kitty litter Every Day. Ugh. And having to detangle Otto’s hair after the aforementioned 10 shower-free days. She is not a calm child when her hair is being deknotted. Oh – and changing my nephew’s nappy when I babysat him and my niece on Saturday night.

The most difficult bit was carrying Otto to the car, after that babysitting session. I had to get my brother to help – fortunately she was awake when we got home so I didn’t have to break my back.

The most exhausting part was juggling my work. I am available to work 23 hours per week. Last week, I worked nearly 40. This week, by 9am Tuesday, I had already worked 15 hours. And was feeling like I was already behind.

The funniest part was the Bigster having friends over to film a brief movie for her English project. Otto had a friend round too, and the two little girls sat at the back door and watched the big kids. “It’s like we’re watching a movie be filmed!”

And the scariest part was finding that the handle is almost off the back door. 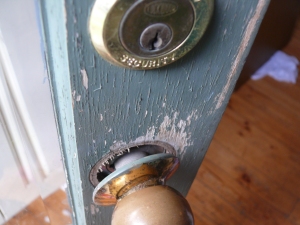 The doorknob is almost off

Now for most people, this would probably not be a problem. I really don’t think that someone has tried to break in, however suddenly this seems to have happened. But I am an absolute coward when it comes to being home alone (in fairness, this came after being a victim of a rather persistent peeping tom in my teens and a burglary while I was home alone not long after), and the combination of that and waaaaayyyyyyy too much diet coke while working late meant that very little sleep was got on Sunday. Even though I locked the doors, I kept hearing Noises. Not-Cat noises. Ugh.

And the most procrastinatey part was writing a blog post when OMG I HAVE WORK TO FINISH TONIGHT.

Posted by Melissa on November 22, 2011 in family, food, not your earth logic, work

← BGGcon Day 5 – In Which Melissa is Very Domestic.
Yikes – AKA What I bought today →

Obsess about something Cancel reply